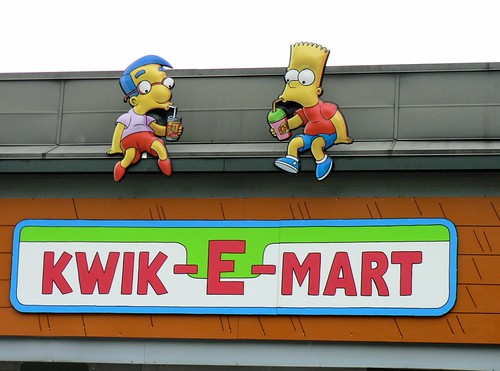 “OK, we’ve got a new car. I know it’s main­ly to make the com­mutes to our jobs a lit­tle ear­li­er and gas is expen­sive, but whad­dayasay we take a lit­tle drive?”

“Great idea! Where shall we go?”

“Well, we’re in Beau­ti­ful British Colum­bia, sur­round­ed by moun­tains, beach­es and parks. We could dri­ve to the Fer­ry and take a trip to the islands. Or we could take a trip to the south of the city to the berry fields and pick some logan­ber­ries or blueberries.”

“I know, let’s take a trip to the only Kwik-E-Mart in Canada!”

And with that, we packed our bags with cam­eras and were on our way.

The Kwik-E-Mart, for those who aren’t famil­iar with this bit of pop cul­ture, is the fic­tion­al Con­ve­nience Store chain in the Simp­sons TV Series (now in it’s 18th sea­son). The store in the show is run by Apu Nahas­apeemapetilon (No one can ever pro­nounce his last name, so he just goes by Apu). In ‘the real world’, the 7/11 chain has picked stores sprin­kled through­out North Amer­i­ca and redec­o­rat­ed them, in many cas­es renam­ing their own prod­ucts, so that they close­ly resem­ble the fic­tion­al stores. It’s part of a tie-in with The Simp­sons Movie, which is due to open in the­atres in 6 days. The result is…a 7/11 with some fun, often hilar­i­ous decor and sig­nage, and a steady stream of smil­ing peo­ple, either cus­tomers or like us, tourists. It’s tru­ly, mar­ket­ing genius. On the Dai­ly Show with Jon Stew­art, Matt Groen­ing, the cre­ator of The Simp­sons men­tioned that the Kwik-E-Mart trans­formed 7/11s were the first time he’d ever seen ‘hap­py peo­ple’ in those stores. Our Kwik-E-Mart is in Port Coquit­lam, a sub­urb to the east of Van­cou­ver. It was a bit of a dri­ve, but we did some shop­ping on the way back, and gen­er­al­ly enjoyed our new free­dom. The traf­fic, on the oth­er hand, I could have done with­out. Doh!

2 Replies to “Road Trip to Springfield (sort of)”