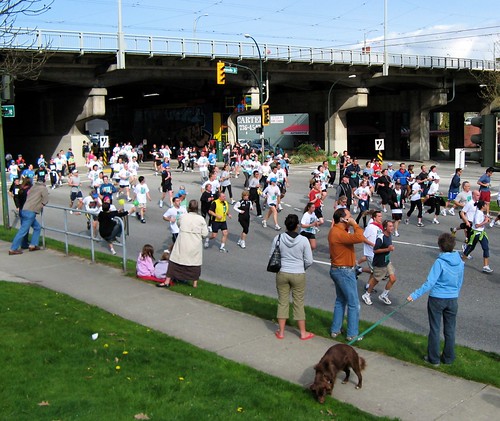 Even though it was a Sun­day and even though I did­n’t get enough sleep the night before (When will I ever learn?!), we did get up fair­ly ear­ly, and a lit­tle after 9:15 I went down to the edge the near­by park that’s just above 4th Avenue. Sure enough, the steel band was play­ing and a few run­ners had already run by. The Van­cou­ver 2007 Sun Run was under way!
While I’m sure there are many here who can offer com­ments and/or crit­i­cism of this annu­al event, I have a some­what unique per­spec­tive as some­one who has had a lot his­to­ry â€” as a spec­ta­tor â€” at anoth­er annu­al run, The Boston Marathon (which takes place, today, back in the city that I left when we moved here).

I think it might be good to lay out my com­par­isons on the table, or rather, in a table:

As you can see, there are a lot of dif­fer­ences. In the end, I like both events, and have even giv­en thought (because 10k is a lot more rea­son­able sound­ing than 40k) to per­haps run­ning in the Sun Run next year. Or maybe, walk­ing (or as it’s called ‘strid­ing’). But don’t hold me to it.

Update: I fear that this year’s Marathon will be over­shad­owed in the news by the ter­ri­ble shoot­ings at Vir­ginia Tech. I’m just too shocked to com­ment now, oth­er than to express my hor­ror, and sym­pa­thy for so many peo­ple who have lost so many loved-ones to sense­less vio­lence this April morning.